This one took a while getting just right.

The idea behind it was to get something sounding in between a 2x12 & 4x12 as i love the punchiness of 2x12 cabs but i like the fullness of 4x12s but i hate the low end bloat they often have.

I then discussed things further with Tom @ Roadkill Cabs and he came up with the idea of altering the dimensions of his stag model and placing the speakers more towards the top of the cab for better projection into the room.

The internals of the cab are also kind of split into two 1x12s (i'll get some pics of this) rather than the usual single piece of wood for bracing to the back plate. This also seems a lot more substantial than what I have seen in a lot of cabs.

The result is exactly what i wanted. Very open,detailed and clear sounding cab with excellent highs, precise mids and a very tight low end without the additional resonance that you can get that can muddy up your sound.

Speakers are Legend V128s wired in series for 16ohm.

For now there is just a very quick pic. I will get some more tomorrow once I have moved all of the gear around. 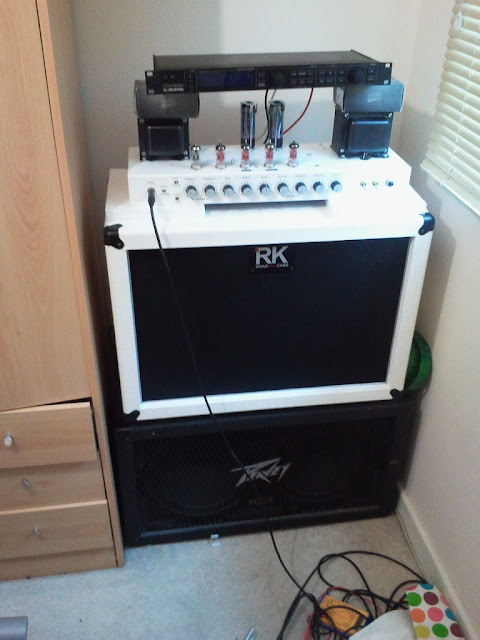 When I started writing this blog I figured that it would just be a place for me to keep tabs of what projects I have been working on and an archive of photos and such.

However it has had a nice steady stream of visitors with a few emails also.

I just want to say a big thankyou for taking the time to read my ramblings and hopefully you will stick with it as things start to expand over the coming months.

If you have any questions or feedback don't hesitate to get in touch.

Email ThisBlogThis!Share to TwitterShare to FacebookShare to Pinterest
Labels: News

I've had this set for just over a week now so I feel that I can give a fairly fair review of them.

First of all i'll get it out of the way that these aren't just the standard 81 & 60 in some flashy covers as most people expect them to be. I wanted a set of these for quite some time being a massive Metallica fan. Especially after hearing some newer live clips where James Hetfield has sounded amazing and cut through really well. From here on we can go into the main bulk of the review.

The Sound
These pickups have a fairly high output which is to be expected as they are designed exclusively for metal and of course they are EMG pickups.

They have a great helping of upper mids which was a pleasant surprise with just the right amount of grind going on there. They also have a touch more low end than than the standard EMG pickups but it is still very tight and precise with absolutely no excess flub. The high end is very upfront but isn't grating in any way and doesn't fizz out.

These pickups don't dissapoint for clean sounds either. The bridge provides that classic james hetfield clean sound, think of the Master of Puppets interlude or the intro of Welcome Home. The neck pickup is even nice r and delivers some very soft yet punchy clean sounds that work really well for things such as fade to black or the intro to and justice for all.

The Look
These pickups look very slick with a very nice black nickel finish with individual ceramic polepieces on the neck pickup and steel poles for the bridge pickup. 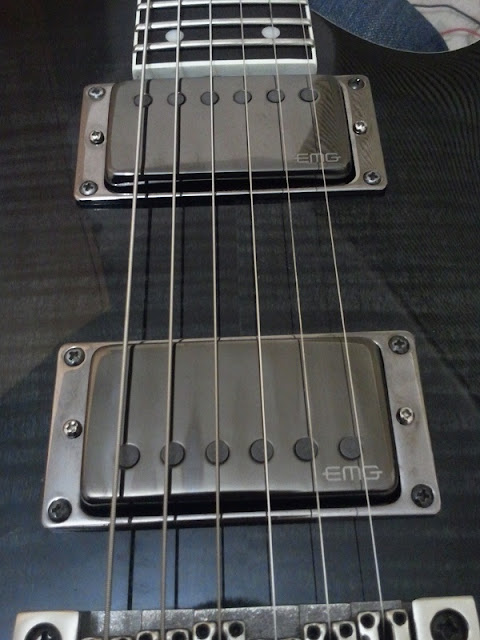 Summary & Soundclips
Overall I am extremely happy with these pickups. I play Thrash metal primarly and these pickups can cover everything I throw at them with ease from Metallica right up to modern Exodus. Usually when I swap pickups out I have some bad points that really niggle at me which is why I left this review for a while and so far i can't find a single fault.

I'm not going to say much on this as I built this for Brow so I'll let him going into more detail on it when he gets it. But for now here are a couple of pictures.


It's a really tiny circuit. I took this one for reference purposes. 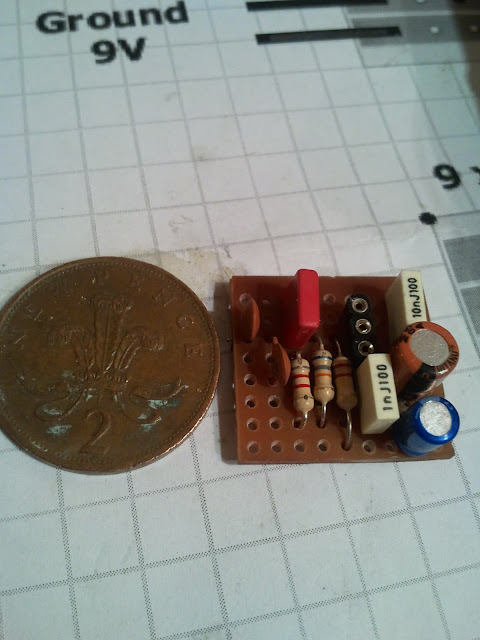 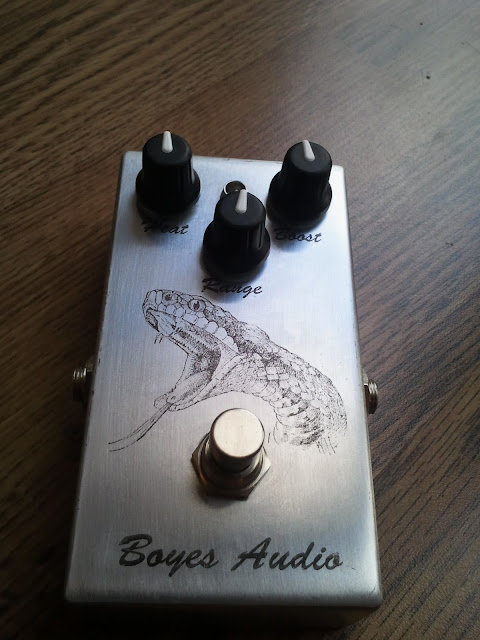 And here's one more with it all powered up just for the sake of it! 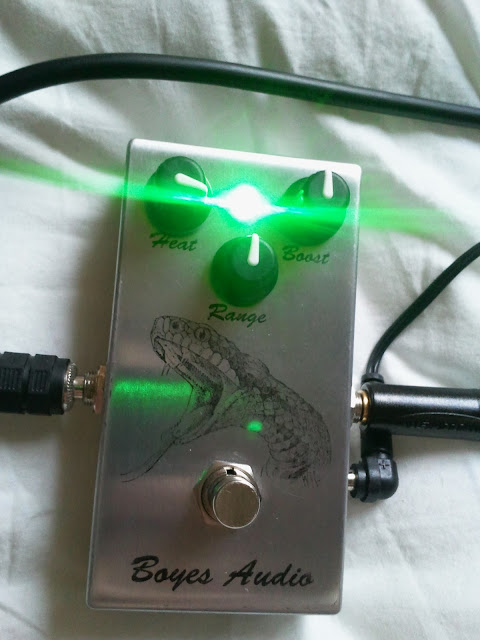 Hey guys.
It's just a brief one today as I really don't have too much time on my hands.

A good friend Ben Asaro kindly provided me with some DI tracks that he used to use for demoing pedals. With this I have reamped it six times across two channels/modes on my amp for demonstration purposes.

During all of the clips the pedal settings stayed exactly the same which was everything set to half way on the dials for consistency. Below you will find all six of the clips with a brief description of what is going on.

When I have a little more time I will do some more in depth clips to show how transparent the pedal can be and also how it sounds in a mix as I would normally use it. If you have any settings requests please leave a comment and I will do my best to accommodate.

Also a big thanks goes to Ben for sharing the DI track.

For the sake of complete consistency I recorded the following clips using the Slave Out on my amplifier which is tapped straight from the speaker output jack. I then loaded an impulse response in Reaper for each item to emulate the cabinet. This ensures that everything is exactly the same across all of the clips other than the channel being changed and the bump switch being activated.

Clip 1 - This is on the clean channel of my amp with the pedal bypassed.

Clip 2 -  This is on the clean channel with the pedal turned on.

Clip 3 - This is on the clean channel this time with the pedal on and with the bump switch engaged.

Clip 4 - This is on the crunch channel with the pedal bypassed.

Clip 5 - This is on the crunch channel with the pedal turned on.

Clip 6 - This is on the crunch channel with the pedal turned on and with the bump switch engaged.

Hey guys here we are on the first post of 2013 hopefully it will be a gear filled year with lots of builds & gear acquisition!

Anyway onto the main point of this post. I've gotten a couple of new pieces of equipment lately and I'll be putting up full reviews and sound clips as I get more familiar with each item.

First up is an incredible Overdrive pedal from MXR. The custom badass modified OD.
Usually I will build my own effects but I felt like having a break and just buying something for a change.

Controls:
The MXR has your standard overdrive controls such as Gain, Output & Tone. It then goes a little further by adding in a 100hz cut/boost control and a bump switch that boosts the low end and midrange when activated.

Sound:
This I find is where the pedal really shines. Without the bump switch engaged it is a fairly transparent pedal and leaves your core tone pretty much unmolested. When you kick in the bump switch the low frequencies and midrange are boosted but not by a ridiculous amount which keeps the core tone but brings the pedal more into a thicker tube screamer territory. Also noteworthy is the fact that the bump switch can be left engaged when the main circuit is off which just thickens up your sound with a very minimal boost which can be nice for cleans.

The gain on tap is fairly smooth when used on a clean channel but there is plenty of it and once you get past the halfway mark it gets nice and gritty. When used on an already overdriven amp you can get total saturation just by adding in a little gain which is very nice for those old school thrash type tones.

Another nice feature of this pedal is the tone control it never gets truly boomy or ridiculously tinny at either extreme of the control and provides a lot of usable options.

The 100hz cut/boost is what really drew me to this pedal primarily being a metal player I like a nice clean low end so a little bit of cut really brings out the tightness required for some more modern styles and when used in conjunction with the tone control & the bump switch you really do have a lot of options and I feel that I haven't fully explored this myself.

The level control is the final control and there isn't really much to say other than it has an extremely large range that should satisfy most users needs.

Build Quality:
This pedal seems really solid and well made with a high quality enclosure and very sturdy jacks even if they are PCB mounted. The pedal mainly consists of micro components which I guess explains the small form factor and also will help with mass production. The switch is very solid if a little softer than I normally use it doesn't have that thick satisfying click that i'm used to be I can't see it failing at any point. The only negative point is that there is a small finish flaw in the bottom corner on the face of the pedal but it's nothing major and doesn't affect functionality in anyway at all.

Overall I am extremely pleased with this pedal and would highly recommend it to anyone wanting a more transparent overdrive that doesn't cut out masses of low end unless you specifically set it to. It's extremely useful for those that play rock or metal.

I will be posting again in a week or so with some sound clips and possibly some more information depending whether my view on this pedal changes as I get more used to it.