Another common mod of the JCA22 or JCA20 is the 'Choke' mod. A choke is an inductor that sits in the high voltage power supply and aids noise filtering. Noise in the power supply can be things like rectification transients and other horrible stuff. In some situations a poorly filtered power supply can ping all kinds of horrid noises into your tone. Nobody likes horrid noises in their tone! The power supply is the heart of the amp can affect the feel and tone as much as any resistors or controls your guitar signal might go through. The high voltage supply in an amplifier is usually referred to at the B+ or HT (High Tension). The terminology comes from other areas of technology when valves were more widely used.

Power Resistors used to make filters are fine. Lots of amps have them. The 5150 has one for example. It's a bit of a brutish way to squash noise. All frequencies in the HT will see the resistance. With a choke the resistance met by a particular frequency will depend on what the frequency is itself. It's a bit like going out to a bar. You head over to one place and they might be frisking everybody and holding everyone up and nobody is getting through but that means there are less people inside (Resistor). Or you go elsewhere where you can walk straight in, unless you're already a mess and then the door staff are going to keep you out! (Choke) 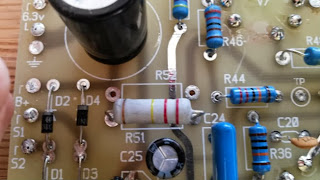 R52 is where the power resistor was. I removed the PCB and then removed the resistor. Another difference between the resistor and the choke is that when you crank the amp and play really hard the valves will start to demand more current from the power supply. If there isn't enough current then HT voltage will drop... this is voltage sag.  As the voltage drops the tone of the amp changes because the HT voltage usually has a nominal relationship with each gain stage to give you particular feel and tone. The power resistor has a large series resistance which increases the effect of sag. The choke however has very low series resistance and therefore lessens the effect of sag. The choke will therefore also increase the HT voltage after it in any circumstance. This is why in some amps when a choke is added as a modification the screen grid resistors on the power valves also need to be changed to account for the voltage increase at the power valve screen supply. 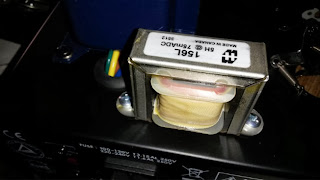 Here is the choke mounted just behind the power transformer. I opted for a 5Henry @ 75mA choke. Henry is a measure of inductance. The mA rating tell you what current can be drawn through the item. There will also be a maximum voltage that can pass through the choke too! 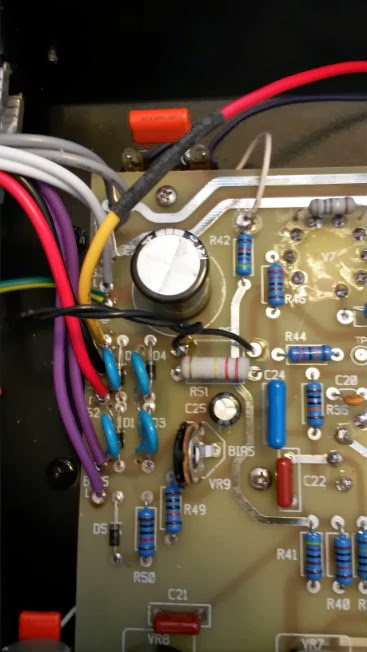 Here it is soldered in place. Done! 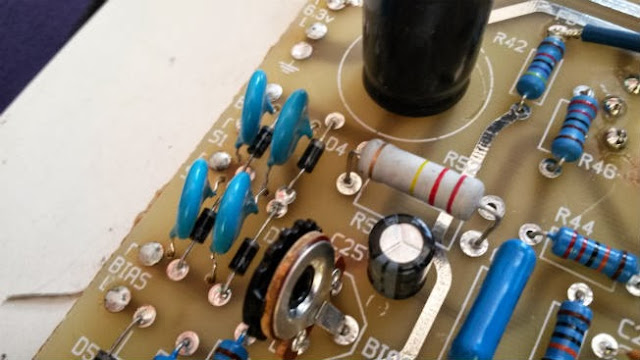 The keen eyed will have spotted that in that last photo there are some extra blue bits around the rectifier. While I had a lot of 10nf 2kV ceramic caps knocking about, I thought I'd add them here. 10nf caps across each rectifier diode help to share the voltage being rectified (turned from AC to DC) between the diodes and to suppress switching transients. Not sure if I can hear a difference... I just did it and thought I'd explain why! If the power supply is the heart of the amp, this is like giving it a wheatgrass smoothie every morning.
Posted by Bob at 16:17