Back for ANOTHER instalment. So the third switch along in the last post is a mid scoop mod. HOWEVER that is not all that is going on here. We need to keep in mind that what was the crunch channel is now able to get pretty clean. I'm not sure how much I liked switching this mod on with more gain... anyway!

The scoop mod is again stolen from other Soldano products. Saying that... it's a pretty old concept and probably has a chapter of its own in the old "RDH4" as it's known (A kind of valve nerd bible).

The mid scoop is activated by grounding a capacitor between two resistors which are bypassed by a second smaller value cap. This is called a Bridged T Filter. The top cap is usually small allowing high frequencies to the skip the filter. The lower cap is large enough to bleed off relevant frequencies but not large enough to bleed low end. Low end is attenuated as normal through the resistors. By disconnecting the cap from ground, we end up with a normal RC (Resistor Capacitor) Network. Highs skip the resistors and everything else is attenuated. The values of the components determine the effect. 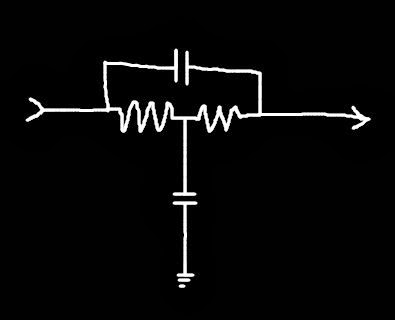 I wanted to fit this into the amp is a nice way. Luckily the PCB has lots of spots with space between tracks. After removing the board I drilled holes for two eyelets and removed the original parts I planned on replacing. 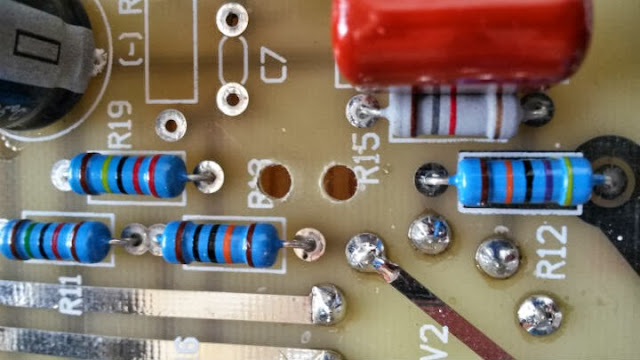 Here are the eyelets put into place. It is awkward doing this with a populated PCB so a lot of care is needed! Don't do it if you shake around like Scooby Doo in an old fairground. 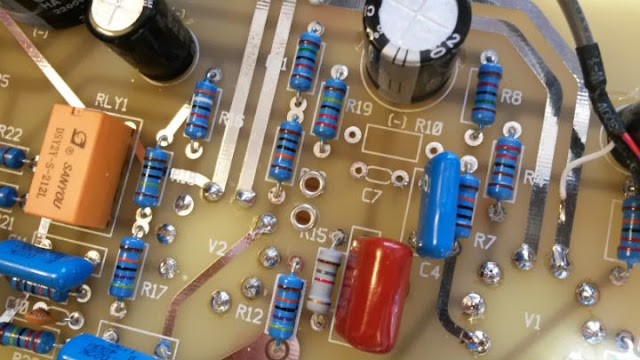 Here is the T filter in place. The yellow cap is the Bridging cap, and the resistors and the little blue cap for the T. The purple wire goes off to the DPDT to switch the mod on or off. Now in the background of this photo you can also see a green wire which is connected to ground that goes off to the switch and another purple wire. 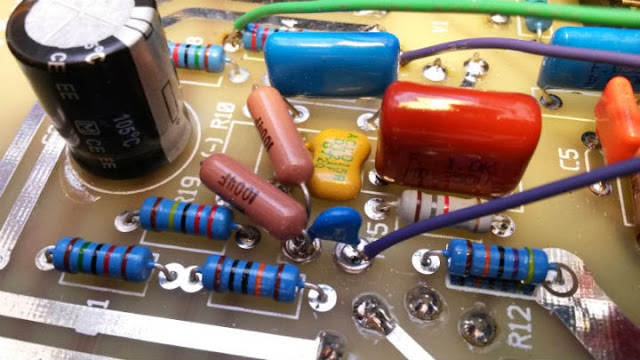 These wires form the next part of the mod. The green wire provides a ground point for filter when the switch is in the on position but it also acts as ground for a 22uf capacitor which when active, sits across the cathode resistor of the second gain stage in the Crunch channel. The reason I added the ground here is to keep this cap grounded at the base of that stages cathode resistor when in use. 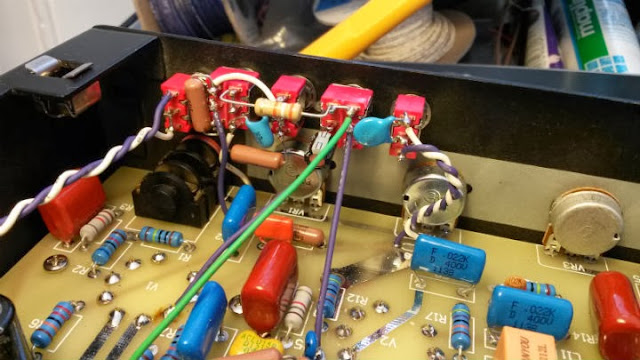 The 22uf Capacitor creates more gain at that stage for almost all audible frequencies. The graph below is just show as an example of a 22uf Cathode Bypass Cap on a stage with a 1M grid resistor. The effect of this cap coupled with the scoop mod means that not only are the mids scoop out but the lows and highs are also boosted which gives are really nice warm clean tone. I like this mod! 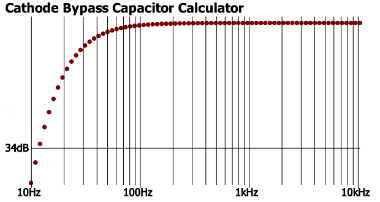